Most of us has been here, are still here … either MORE monies for batteries, WANT/HOBBY level much?

Or do we sit back and think, do the cents on the Rand spent on Eskom justify that huge expense on batteries?

Or do I just use what I’ve got, “drive them hard or let them die of old age”, and get the correct sized lithium bank and be done?

… and NOT be caught in the cycle … I now have more batteries, I need more panels now …

Indeed. In my case, I want to drive them as hard as possible during the time that the sun doesn’t shine, but over that entire time period. But you are correct, if I get more batteries I’ll also need more panels. My West panels do fine during summer, but they struggle really hard in the winter.

LFP is much more resistant to temperature

NMC should probably do better in higher temps than LFP but that is if only looking at temperature removed from DOD etc.

If looking at temperature as variable the following paper also is quite telling. The authors compared Lead Acid and LFP batteries in a modelling study but importantly included both cycling and calender ageing for the LFP batteries:

Comparing fairly oversized battery banks (off-grid type system with >2 days autonomy) with associated very low C rate discharge/charge in two locations where one has an average temperature of about 5°C and another with an average temperature of about 25°C. Their results suggest that for lead acid in the 5°C climate the lead acids could have a 12 year life but only 5 years in the 25°C climate. For LFP in the 5°C climate the life was calculated to 20 years, but reduced to 13.7 years for the 25°C climate.

If a NMC bank which is equally oversized and used in a climate >25°C I suspect the NMC could last a bit longer than the LFP.

But with initial out of pocket cost I think many people in South Africa will end up with battery banks that cycle closer to the 20-100% DOD type range, where LFP might then be better in terms of getting the most energy for the Rands spent over the life of the batteries.

So how should I read the graph you posted (I’m obviously not getting it)? I see the y-axis as the total energy taken from the cell before it reached 80% of its original capacity. So I interpreted the 35 degree 1C LFP column as the cell delivering about 16kWh in total across a bunch of cycles before reaching 80% original capacity on a cycle, whereas it was about 7kWh on the NMC cell.

*Edit: Nevermind, I think I’ve got it. These cells weren’t similar in Ah at the start. So you should really be comparing the LFP against itself and the NMC against itself? Seems like a strange way to display the results. It would’ve been much easier to interpret had the results been normalised in some way but that might be a challenge in itself as certain chemistries are more suitable to be used in certain conditions than others… 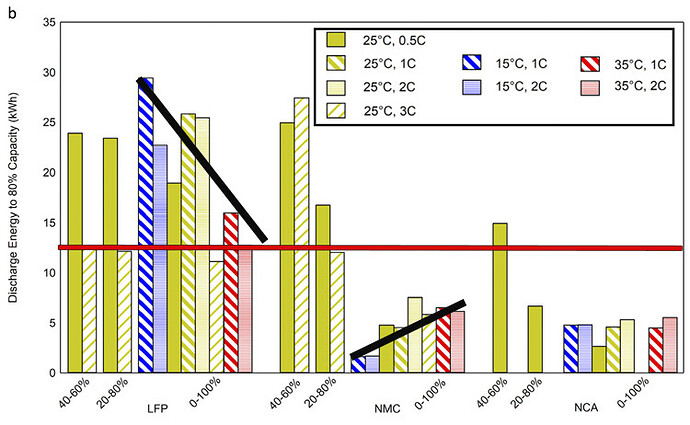 In a 0-100% type cycle the very rough trend of rate of capacity loss at temperature of 15°C, 25°C and 35°C is shown by the black lines. So technically LFP is more sensitive for higher temperatures than NMC.

But the graph shows energy taken form the cells up to the point where cell capacity <80% (the actual LFP cells were about 3.6Wh and the NMC 10.8Wh in original capacity). So, with NMC cells that have about 3x the energy of LFP cells, the researchers got more actual energy from the LFP cells than the NMC cells before being kaput. But you also clearly see that at higher temperatures the LFP cells’ overall output declined quite dramatically, where as NMC actually improved.

Thanks, yeah after taking a second look last night I realised that. However, doesn’t this show that even in abusive scenarios (discharging way harder than LFP really should), LFP is at worst still superior to NMC and most of the time significantly better?

These graphs should be normalised for original capacity, and therefore each LFP line should be x3 to make it comparable to the NMC. So it’ll be close to a draw on the 40-60 3C scenario (still favouring LFP) but a total wipe on all the others.

Maybe it isn’t fair to normalise on original capacity, because price would be different as well. But at least then a buyer can take the graph, expect XkWh out of LFP over its life (depending on the applicable column) and YkWh out of NMC over its life, and then it is easy to calculate the economics.

I had a quick very superficial look and for the specific cells used in the research the NMC is actually more expensive than the LFP. So from a total energy perspective the LFP is definitely the “no brainer”. But these are 18650 cells and the NMC looks like it is popular for vaping use where both safe high C and high temp use probably trump total life (niche product with niche price not reflecting production cost but highest price consumers will tolerate?). In other applications/configurations the price difference could be very different.

I come from a critical (and stingy) consumer perspective where various brands are competing for my money and this jousting is mostly done through marketing claims. In the battery world “expected cycle life” is for me the equivalent of camera zoom claims to market cameras, or cd-rom speeds (when people still used those), or HD/HD ready TV. The terms are not standardised.

So, what I take from the research article is that quite possibly

But then still keep in mind the research was with cells, not batteries. So the trends of the chemistries are interesting but does not say too much yet when cells are combined into a battery and says nothing about any brand battery vs another.

Didn’t we say a while back that the Hubble batteries do not use LFP cells but rather NMC?

Hubble are using NMC cells and not LiFePO4 as far as I understand.

Given the above, Hubble batteries might not be a great RE solution in the medium to long term. Not sure if cell vs battery (with BMS) would impact it that much?

Absolute durability and high C discharge capability or mostly determined by electrode design. So (within limits) you can design any lithium battery to give high life cycle discharge, and at high C rates if required.

Aaah thermal runaway, my old friend. Thankfully my first experience with that was transistors in an amplifier.

cell vs battery (with BMS) would impact it that much

it could → badly designed firmware, BMS hardware not coping with same levels of temperature extreme as cells etc.

I have no horse in this race…

Assume the following have no design/manufacturing and/or supplier support problems and prices are roughly correct (and I am too lazy to do calculations to the n’th decimal to choose an ultimate winner).

Based on both price and the apparent trend in cycle life of the chemistries, Pylontech seem to be better value. (but this is very much influenced by Pylontech having economy of scale allowing for a much lower entry price).

Comparing the Hubble to Freedom Won (both importing cells as far as I know). The distinction becomes less clear but will still probably favour the LFP.

This chart is supposed to be for the BYD NMC cells used in the Hubble batteries: 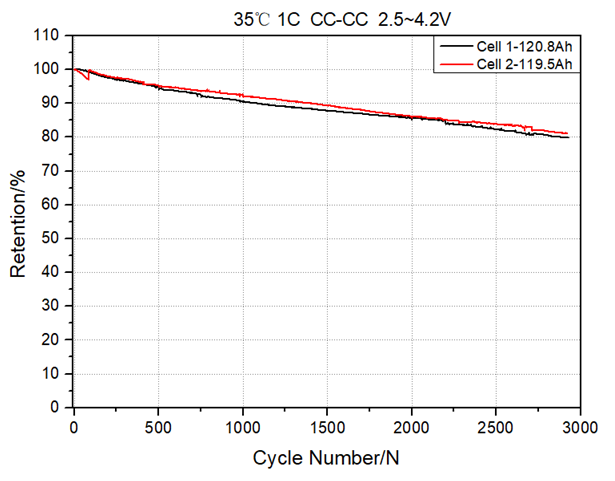 So supposedly you will get about 3000 cycles using 1C charge and discharge at 35°C
(Not that very many people use them like that, so you should hopefully get more than 3000 cycles)

I just saw this: 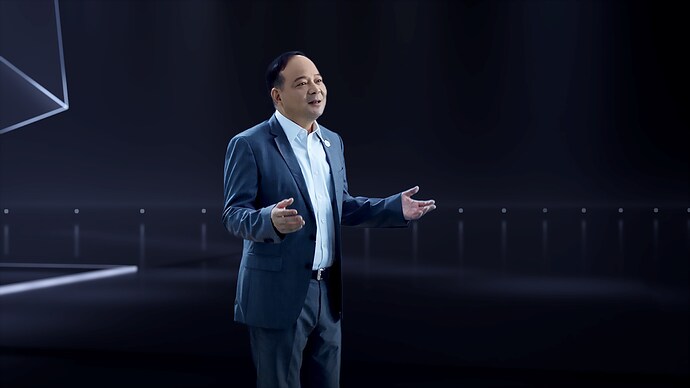 CATL claims to have made sodium-ion batteries a commercial reality

The manufacturer has launched sodium-ion products online. Production has begun and will be easily scalable, according to the CATL chairman. Researchers have been keen to make the technology work as it offers a cheaper, more environmentally friendly...

Hopefully these will start becoming available for home storage as well soon.

Just to add this article on this manufacturer which looks like we will become more familiar with going forward: China’s “dreamchild” is stealthily winning the battery race | The Economist

Are all 18650 cells basically the same? (except for capacity differences)
This article interested me on identifying this category but no mention made of differences in chemistry:

Before anything, I’ll briefly explain what 18650 cells are and what uses they may have. I have worked a lot with 18650 cells and I used them for pretty much anything that needs power.…