Thanks @Phil.g00 , @neliuszeeman , the wman who twisted and broke MY arm, is chatting to Amy, WAS already chatting to Amy. your reference just boosted it a lot more.

Her cells are like ±$40 more than our original idea, methinks, it matters a lot more to have proper cells from day one. So we will see what the final price is on Amy’s cells.

If anyone want to buy with the group, post you totals here, copy/pasting the previous order, to keep a track of the cells to no having to scroll up and down.

With the final total cells, we can get firmer import pricing, as we have a importer on the list of buyers.

Ask for double the number of busbars and all cells professionally matched.

OK, on a technical issue, why not 18 cells in series. if your BMS can handle it, with Victron equipment?
Victron charges up to 60Vdc? I don’t see the downside…
No spare cell sitting doing nothing, And now being incapable of overcharging healthy cells so it’s inherently safer.
So you get a bad cell and you drop your settings and you can afford to drop down to 15 cells easy (Pylontech territory)?
Conventions are for the birds, the conventions have to satisfy all inverter/chargers capabilities. But you have Victron equipment, so I’d like a technical reason to dispute my opinion.
I accept if you’ve bought into a 16S BMS, there are cost implications, but the tail shouldn’t wag the dog.

I accept if you’ve bought into a 16S BMS, there are cost implications, but the tail shouldn’t wag the dog.

We are focussing on getting 20s BMS’s.

Ones that can be programmed. See BMS Group Buy

I’d like a technical reason to dispute my opinion.

With all these options … I cannot see why not? 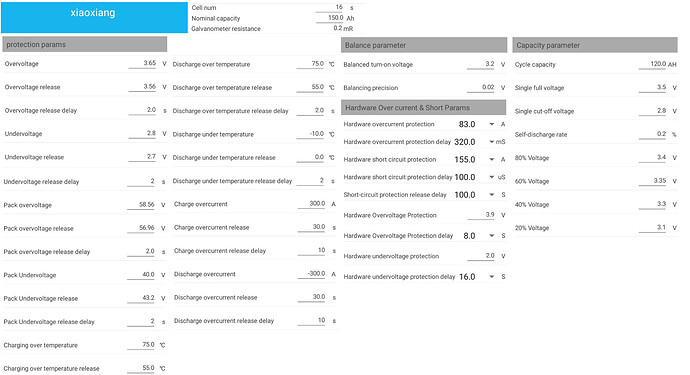 Once we have the total cells = volume and weight = then we can get a quote on landing costs, excl VAT and Customs charges.

You don’t have to kill yourselves:
Rome wasn’t built in a day…
Then again, I wasn’t foreman on that job.

Of course you can run your cells at lower voltages, but then you’re losing out on some useful capacity, so I’d push to at least 62V. That is of course no problem for a Victron setup.

You’d need a BMS that can handle more than 16 cells AND that will balance below 3.45V. Some BMSes only close the bypasses above a certain voltage, as it is usually pointless to balance lower down.

The new thinking is only to live the plateau of the charging curve.
Apparently, it’s better to avoid the potential decrease in longevity that may be caused in a cell as voltage rise that comes very quickly for the sake of a few per cent extra capacity.
Certainly, with an extra two cells, you are more than getting what you may lose back.

The new thinking is only to live the plateau of the charging curve.

I agree that people pushing for 3.55V per cell (or even higher!) do so at the risk of shortening battery life, and for very little extra capacity. It comes down to what voltage you consider the elbow point. In my mind this voltage has always been 3.45V per cell, or at least 3.4V.

Interestingly, the BSLBATT battery that is sold by GetOffGrid (and now fully supported in Victron systems) have a 54.5V charge voltage, with 16 cells, which means about 3.4V per cell. And I was really impressed with that battery…

Oh absolutely, just make sure you have a BMS that balances around that point.

I have one concern left. Maybe. Which is just that on the flat part of the curve, you actually don’t know if the cells are balanced. They may have a similar voltage, but because they are on the flat part of the curve, they may differ somewhat in their state of charge. That might be another reason why you need to take them at least towards the elbow point, if not above it. But again… you can fit 18 cells into 63V (18 * 3.5V), which is not too high to make this work…

, just make sure you have a BMS that balances around that point.

Look at all the settings one can adjust …

all the settings one can adjust …

So you’re fine then… but don’t expect to buy some random one and for it to just work. Like last time, né?

I’m running at 3.5v, once the cells are balanced.

Hmmm so should I change my Pylontech bank’s charge voltage from 52.4V down to 51.75ish?

I better expound on this opinion.
In the beginning, people were doing what they were told, and reputable battery suppliers were only working with professionally matched cells. More and more though there has greater experimentation and through that a better understanding of these cells.

Let us consider a single cell:
If you drew a very thin line on an overhead transparency slide representing a single cell’s charge/discharge curve at 10 deg C and overlaid another slide representing the exact same cell at 30 deg C. Then that your settings would be governed by the inside of the flat portion of both curves.
(I accept that both limits may be covered by one of the two slightly different curves.)
In this instance, you would be able to tailor your charging settings to get the absolute maximum safe capacity out of a single cell.
But a battery bank isn’t a single cell, it is a bank of cells in series.
Now your cells may indeed be matched, but I doubt absolutely perfectly matched. So let’s overlay another 15 pairs of slides on top of the first two.
Offset each pair of transparencies half a millimetre to all points of the compass.
Now, that once thin line becomes quite thick and blurred and your charging range is again shortened to the limits of the flat of the blurred plateau.
But wait there’s more ( as they say on late-night TV)…
People have sought to find cheaper solutions, as they do.
People have been knowingly (and sometimes unknowingly) been taking advantage of cheaper un-matched cells. ( Still new, but sometimes $40 per cell cheaper). Now that overlaid charging line is thicker again and that flat portion has to have an even more conservative margin.
So further capacity is again apparently sacrificed.
But, at these cheaper prices, people have started building 2P 16S, 3P 16S and 4P 16S banks.
Thereby increasing their banks’ capacities again, and they also don’t want to go to the expense of a BMS/16 cells, so they take advantage that the charging line doesn’t actually get thicker indefinitely.

The trade-offs now become worth it to have more conservative settings, a greater bank capacity and still enjoy battery longevity.
Now, my argument is at these more conservative charging settings, one can afford to have 18 S banks, with Victron equipment that can charge up to 60V.
Once, I had formed this opinion, I found that some people ( other internet DIYers) who were already advocating this approach had implemented it and were not seeing any disadvantages.

In my own experience, I have had a bank of 4S 12 V Silver Calcium LA batteries, which charge at about a volt/battery higher than standard LA batteries, so I know the reliability of Victron equipment isn’t adversely affected by this non-standard higher charging range.

And then there are people who go for premium cells, a configurable BMS, and then don’t have to go 2p, or 3p … thanks to all this new knowledge being shared by more knowledgeable people.

If @plonkster is happy on the Victron side, @Phil.g00 happy on the cell side, then I see no reason why not to go 18 cels. I can even drop the volts down from 3.5v If that makes any difference.

My goal is to settle on a bank and forget about it for many many years.